More people continue to be injured, killed by prescription drugs

A record number of deaths and serious injuries associated with prescription drugs were reported in the first quarter of 2008.

The U.S. Food and Drug Administration received 20,745 new cases of serious injuries during the first quarter, an increase of 38 percent over 2007. The number of deaths reported is 4,824, a 2.6-fold increase from the previous quarter.

For a second straight quarter, varenicline (Chantix, Champix), an aid to help stop smoking, accounted for more reported serious injuries than any other prescription drug, with a total of 1,001 new cases including 50 deaths, according to The Institute for Safe Medication Practices, an organization that educates healthcare providers and consumers about safe medication practices.

Ranked second in reported serious injuries was the blood thinner heparin, the subject of a major product recall after a potentially lethal contaminant was identified and traced to suppliers in China.

In the first quarter of 2008, the FDA received 779 reports of serious injury in which heparin was the principal suspect drug, including 102 deaths, the institute reported.

Because reporting is voluntary, only a small fraction of adverse drug events that occur are reported to the FDA, or to drug manufacturers, which then investigate and forward reports to the agency. Also, while the sum of adverse event reports normally provides an overall adverse event profile for a drug, the individual reports themselves do not prove that the drug caused the event described, the institute said in its report.

Diet and Your Prostate

The strongest risk factor for prostate cancer mortality was animal products, such as meat and dairy products; the strongest risk reduction factors were onions and other protective vegetable products (cereals/grains, beans, fruits, and vegetables, but excluding alcohol, oils, and added sugar (sweeteners)). Thus, fat and protein are risk factors, while complex carbohydrates and antioxidants are risk reduction factors.

This finding points to insulin-like growth factor-I (IGF-I) being an important risk factor for prostate cancer. IGF-I is also increased by total energy consumption. This study supports earlier reports that allium family vegetables (e.g., garlic, leeks, and onions) as important risk reduction factors for prostate cancer. This study also found that alcohol is a minor risk factor. No independent correlation was found for tomatoes, a source of lycopene, thought to reduce the risk of prostate cancer.
Posted by KNN-AHTUR KEYMAH at 10:56 AM No comments:

Free "Green-Gifts" for Donations to KNN

Greetings KNN Family. To help support our continued effort to bring you “Breaking World News” and the latest “Kingdom of Yah News” we are offering free “Green-Gifts” for your support and donations.

The job of KNN is to provide easy access to news and information, for people all over the world - free of charge. Over the past 2 years we have reached thousands of people worldwide and this coming year we hope to expand and reach even more people.

We need your support to keep our projects online: to pay for servers, bandwidth, staff salaries, office space, and other necessities. We also want to focus more attention on program development, particularly in communities that have little or no access to Kingdom of Yah information.

To this end we ate offering the following:

Thank-you for all of your continued support.
Posted by KNN-AHTUR KEYMAH at 11:39 AM 2 comments: 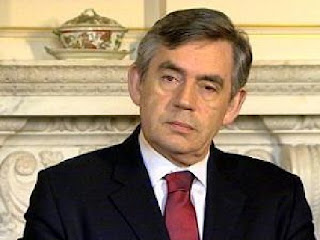 While maintaining that he was pro-business, the Prime Minister said certain "key ethics" were essential for a stronger economy. Mr Brown said financial systems must reflect the values of "fairness, stewardship and co-operation" cherished by families and communities.
"I admire the market's ability to release the dynamism and enterprise of people and so this new Labour Government is pro-business and pro-markets and always will be," he said."But I also know that we do not live by markets alone. I have long understood that markets rely on values that they cannot generate themselves.
"Values as important as treating people fairly, acting responsibly, co-operating for the benefit of all."Mr Brown said developments around the world were raising "quite fundamental questions" about the relationship between the government and the markets.
"The first financial crisis of the global age has now laid bare the weaknesses of unbridled free markets," he added. The Prime Minister's remarks came as hostilities broke out between the Government and the Conservatives over the financial crisis.

David Cameron sought on Friday to lay the blame for the looming economic recession at the door of Mr Brown. The Tory leader effectively ended what remained of the tentative political truce on the issue, arguing that the current financial crisis had exposed Mr Brown's policies as "a complete and utter failure".
Posted by KNN-AHTUR KEYMAH at 11:02 AM 2 comments: 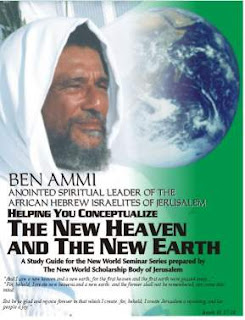 The cataclysmic repercussions from the Western world’s economic structure and its reverberations in the East are nothing short of Biblical proportions. However, spiritual wisdom from Leaders like Ben Ammi Ben Israel and his Government is cynically ignored in favour of conventional political and economic theories; like the elders teach, ‘educated fools are the worst ones.’ Brown, Bush and Cameron (BBC).

For over twenty years Ben Ammi has taught of the dangers of capitalism as an economic system and its mother ‘liberal democracy.’ Check the evidence.
While Britain’s Tory Opposition Leader David Cameron blames Gordon Brown, Labour Party Leader and Prime Minister for the economic fiasco, and Brown laments the dangers of "unbridled capitalism", the Government of the Kingdom of Yah, with great vigilance, continues to watch the leading nations of the world heading for a ditch.
____________________________
Ben Ammi’s economic system is called ‘All Things in Common’ is based on the ethics of ‘Co-operative Economics.’ All institutions within the Redemptive Hebrew Israelite Community are Regenerative and life-centred.

This message is heralded to the four corners of the earth by roving Ambassador-at-Large by way of summits with governments and Heads of State. While some African governments have become partners, others remain locked into the comfortable psychosis of staying with the mainstream for fear of being ostracized and sanctioned. All too many are there who erroneously rest in their position under the umbrella of these systems, believing themselves to be safely shielded from the effects of a crumbling, eroded socio-economic system.

But there is hope, as Gordon Brown in the Yahoo News article above confesses, politics and economics do not have the answer. Or is there? It seems like they have been heeding Ben Ammi’s message from his CDS, books and on-line master-classes. Writing in his book ‘An Imitation of Life: Redefining what constitutes life and living in the New World’ pg.10 he warns of "the rise of the civilisation of deception, a people placing great emphasis on the dissemination of false information, deception..." Liberal democracy and capitalism are like a schizophrenic with split psyche. On pg. 148 he concludes, "...no man can move in harmony with two different beats at the same time."
Posted by KNN-AHTUR KEYMAH at 10:10 AM 2 comments:

REGULAR exercise can reverse the decline in brain power caused by ageing and Alzheimer’s disease, according to a new survey.

The research found speed and sharpness of thought, as well as the size of brain tissue, was increased by aerobic exercise.

The article, published in the British Journal of Sports Medicine, found deterioration in the brain’s white and grey matter as people age.

“However, it is these executive control processes that appear to be the most amenable to an aerobic exercise intervention.”

He found that six months of exercise reversed age-related decline and the brains of older adults retained the capacity to grow and develop.

Physically fitter adults have less evidence of a deterioration in grey matter than their less physically fit contemporaries, the report stated.
Posted by KNN-AHTUR KEYMAH at 7:03 AM No comments:


‘From Palate to Planet’ was the stimulating topic delivered by Resident Prof. Yehoeshahfaht Ben Israel of the Institute of Regenerative Truth at the annual Vegan Festival’s Seminar. Ahk Yehoeshahfaht is a popular speaker at the event which always showcases the Extension’s creative dishes and impressive national presence in the New World celebration colours of the year. In his powerful lecture, he “expanded the bedrock of what being a Vegan means to the environment.” He ended with Ghana update through the African Hebrew Development Agency (AHDA).
______________________________________ 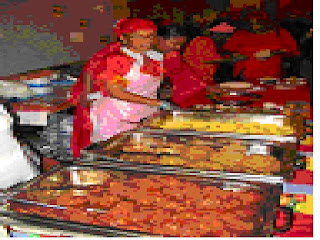 According to the event Co-ordinator Ms. Verity Shepherd- Hunt Information Officer, well over 3,000 people passed through between 10:00AM and 7:00PM excluding stall holders. The annual festival is held in the Royal Borough of Kensington Town Hall, in West London. Vegan Day started in 1944 by Donald Watson [1910-2005] a humble English Yorkshire man and is now a spectacular showcase of displays, campaigning groups, promotional products for skin, hair, clothing and footwear and of course, much to sample and feast on.
This year’s highlight was the Extension’s launched of their Vegan Catering Service ‘Cre8aplate’ after years of requests and demands by the public for cooking classes and eat-in or a take-out services. The Caribbean touch cuisine flavours, in the popular Bar-B-cue twists, lentil patties, vegetable rice, selection of sauces, salads, freshly squeezed juices, raw (live) foods, selection of dehydrated foods and cakes, saw hundreds of customers queue up to secure their orders as Cre8aplate made its debut and secured its identity.

Administrative Taskforce Member and Director of Sisterhood Affairs, Ahkote Yikarah E. Immanuel spearheaded the operations which involved the whole Extension in the preparation, cooking and serving on the day. This year the standard was raised to a higher level. The presence of the community always brings a unique righteously captivating ambiance in: 1) The unity of colours. 2) The African-dominated identity of the community. Many inquired while others complemented on the beautiful image that the unifying colour conveyed.

Over the years the ocean of white faces on the London Vegan landscape has gradually evolved to a slightly varied and more colourful melanin mosaic. While there are encouraging signs of more people of African descent entering the Vegan food path and the food business; said Ahk Shakadiel Ben Israel, Administrative Taskforce member and Public Relations Representative, “We are well established here but this is not nearly enough, there is room for growth. We will do more outreach, participate in and create more Vegan fares to bring the majority of our people into this space and for them to own it!” “We cannot be complacent!”

When Donald Watson and his wife Dorothy created the word Vegan from the beginning and end of the word VEG-e-tari-AN sixty-four years ago in Yorkshire northern England, United Kingdom and founded the Vegan Society; little did they know that today this worldwide movement will include a whole community of people of African-descent based on a plant-based diet started by Anointed Spiritual Leader Ben Ammi Ben Israel of the Hebrew Israelites at Jerusalem some twenty-three years later in 1967.
___________________________________________
Asked in a ground-breaking interview by ‘Foods for Life, ‘How does your veganism relate to any religious beliefs you may have?’ Watson replied, “I never had very deep ones. I've never been clever enough to be an atheist - an agnostic, yes. Some theologians think that Christ was an Essene. If he was, he was a vegan. If he were alive today, he'd be an itinerant vegan propagandist instead of an itinerant preacher of those days, spreading the message of compassion. I understand that there are now more vegans sitting down to Sunday lunch than there are Anglicans attending Sunday morning service. I think that Anglicans should rejoice at the good news that somebody at least is practising the essential element in the Christian religion - compassion.” Full interview at: foodsforlife.org.uk/people/Donald.watson.vegan.html
___________________________________________
Ben Ammi marks 26 years since he first wrote ‘God the Black Man and Truth’ (now available in hardback) which exposed the role that the Trans-Atlantic Slave Trade played in the degenerate dietary transformation of African-Caribbean and African American populations. In his famous chapter, ‘The Making of a Slave or Soul Transformation’ re-written today can be entitled, 'Soul Regeneration and the Return to the Genesis.'
Posted by KNN-AHTUR KEYMAH at 8:12 AM 1 comment: