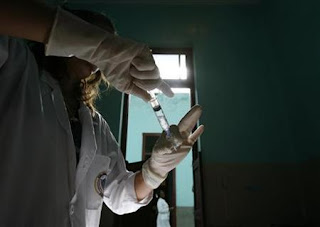 One in 10 adults will have diabetes by 2030, posing a huge challenge to healthcare systems around the world, according to a report on Monday.

The number of people living with the disease is expected to soar to 552 million by 2030 -- equating to three new cases every 10 seconds -- up from 366 million in 2011, unless urgent action is taken, the International Diabetes Federation said.

The vast majority of diabetics have Type 2 disease -- the kind linked to poor diet, obesity and lack of exercise -- and the problem is spreading as people in the developing world adopt more Western lifestyles.

Diabetics have inadequate blood sugar control, which can lead to serious complications like heart disease and stroke, damage to the kidneys or nerves, and to blindness. Worldwide deaths from the disease are now running at 4.6 million a year.

"In every country and in every community worldwide, we are losing the battle against this cruel and deadly disease," said Jean Claude Mbanya, president of the federation, which represents over 200 national associations.

Global sales of diabetes medicines totaled $35 billion last year and could rise to as much as $48 billion by 2015, according to research firm IMS Health, driven by increased prevalence and treatment, especially in countries such as China, India, Mexico and Brazil.

(Reporting by Ben Hirschler; Editing by Jon Loades-Carter)
Posted by KNN-AHTUR KEYMAH at 4:24 PM No comments: