Cleveland's own Gerald Levert Dies at 40 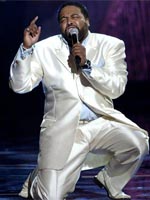 NEW YORK -- Gerald Levert, the fiery singer of passionate R&B love songs and the son of O'Jays singer Eddie Levert, died on Friday. He was 40. His label, Atlantic Records, confirmed that Levert died at his home in Cleveland, Ohio. "All of us at Atlantic are shocked and deeply saddened by his untimely death. He was one of the greatest voices of our time, who sang with unmatched soulfulness and power, as well as a tremendously gifted composer and an accomplished producer," the statement read. Dan Bomeli, public relations manager at University Hospitals Geauga Medical Center in suburban Cleveland, said Levert had been brought to the hospital. Bomeli said Levert had died but he had no further details....Later reports say he deid of a heart attack.
Posted by KNN-AHTUR KEYMAH at 3:33 PM No comments:

Looking for the definition to a word? Click on the link below to use the Merriam-Webster's Dictionary Online. This is a must for all scholars and truth seekers. It is an exhaustive tool to aid in your class preparations and research. This tool can also be added to your "Favorites" links for quick and ready use. Enjoy.

Click Here: Try Merriam-Webster Online
Posted by KNN-AHTUR KEYMAH at 9:23 AM No comments:

Label May Say Healthy, but Grocer Begs to Differ

For many grocery shoppers, the feeling is familiar: that slight swell of virtue that comes from dropping a seemingly healthful product into a shopping cart. But at one New England grocery chain, choosing some of those products may induce guilt instead.

The chain, Hannaford Brothers, developed a system called Guiding Stars that rated the nutritional value of nearly all the food and drinks at its stores from zero to three stars. Of the 27,000 products that were plugged into Hannaford's formula, 77 percent received no stars, including many, if not most, of the processed foods that advertise themselves as good for you.

These included V8 vegetable juice (too much sodium), Campbell’s Healthy Request Tomato soup (ditto), most Lean Cuisine and Healthy Choice frozen dinners (ditto) and nearly all yogurt with fruit (too much sugar). Whole milk? Too much fat — no stars. Predictably, most fruits and vegetables did earn three stars, as did things like salmon and Post Grape-Nuts cereal. Must Read Article: Click here: Label May Say Healthy, but Grocer Begs to Differ - AOL News
Posted by KNN-AHTUR KEYMAH at 12:08 PM No comments:

Is this 21st century colonization?

Is the interest in Africa genuine, or is there a hidden agenda? Arguably, China might be helping Africa to meet its needs via tapping into those resources that Africa is yet to recognize. In the recent past, China has become an oil hungry country and Africa is emerging as an oil continent. In return, Africa is getting help in the areas of reconstruction (bridges, roads etc). But are there any real gains for African countries? Can’t Africans themselves reconstruct what the Chinese are doing for them? We can only hope that these questions will be answered by African leaders after they have gathered at the summit between China and Africa scheduled in Beijing this week.

China’s motives are clearly economic but we also know that they have one of the worst human rights records in the world and this has to concern our African leaders. China, a super power and all weather friend is showing interest in Africa unlike other members of the G7 who never wanted Africa to be self-sufficient. China claims that “it will lead Africa to its own development”. But we must remember that today, China is importing more oil from Africa than it does from Saudi Arabia. Isn’t this the way colonialism started? By finding resources, tricking the people into believing that this would benefit them, then only to use a divide and conquer tactic. Perhaps it does not matter at this point in time what color the cat is, as long as it catches mice. So who is next after the Chinese? India? And then the grabbing of territories? This might be a rebirth of colonialization. Africa must not be blind sighted.

Beijing facelift for Africa summit , BBC News, Beijing: The Chinese capital has undergone a really extraordinary transformation this week as Beijing welcomes 48 heads of African governments. Out in the street now there is a hoarding that must be about 30ft (9m) high and 50ft (15m). On it are 10ft-high zebras and giraffes and an enormous African elephant - and these hoardings are all over the city. Beijing is festooned with pictures of Africa, with new flower beds that have been rolled out overnight, even with Christmas decorations. The Chinese are really rolling out the red carpet for this China-Africa jamboree. To give another example: the street behind me at this time of day is usually completely clogged with traffic. But today there are virtually no cars on the streets, because half a million vehicles have been ordered out of Beijing for this week in order to keep everything flowing nice and smoothly. Above me the sky is blue, another rather unusual event in the Chinese capital. Many factories have also been closed down.

Special relationship: This is in many ways a dress rehearsal for the 2008 Olympics. It also shows just how important the Chinese now consider their relationship with the African continent. But what is that relationship really about? Well, the slogan on the wall behind me here says "Friendship, peace, co-operation and development". It is very clear what the Chinese are getting out of this relationship. China now imports more oil, for example, from Angola than it does from Saudi Arabia. The Chinese economy has a voracious appetite for all sorts of resources from Africa, from timber to iron ore to diamonds.

What I think is far less clear is what this new relationship is bringing in terms of benefits to the economies and, more importantly, to the people of Africa.
Posted by KNN-AHTUR KEYMAH at 12:01 PM 2 comments: