Radio One entices Dr. Baruch back in front of the mic to educate the Masses on Health, Wealth and Relationships. Listen to Dr. Baruch every Saturday morning from 7 to 8 on WOL 1450 on the AM dial or check him out on the net at wolam.com. Stop the madness and let’s start living life like its Golden. Want to advertise on the Dr. Baruch Morning Show, reply to this email with that request. Sign up for Dr. Baruch’s Super Shrink Me - Weight Loss Clinic August 26,2006. Please contact me for speaking engagements and nutritional consultations for you or a friend. "Together we can make the world healthier. "Check out my website for information on wellness and wealth creation advice and tools. Rescheduled for September - Due to overwhelming demand, I am offering for the second time this year the Conquering Diabetes Seminar. More information will be forthcoming. Please send me your suggestions for future Wellness Wednesday topics. I Love you and pray that you support your body's continual efforts to be healthy. Don't let the desires of your tongue or the influence of radio and TV advertisement get in your way. At your service, Dr. Baruch. Contact me at eatthecure@drbaruch.com or www.drbaruch.com.
Posted by KNN-AHTUR KEYMAH at 6:52 AM 1 comment: 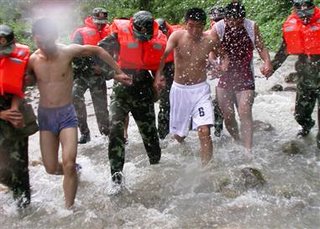 BEIJING - The most powerful typhoon to hit China in five decades slammed into its southeastern coast Thursday, destroying hundreds of homes and battering the region with rain and wind after more than 1.3 million people were evacuated, state media reported. At least two people were killed. Typhoon Saomai was the eighth major storm to strike China in this summer’s unusually violent typhoon season. Torrential rains were forecast in the next three days as it churned inland across crowded areas where Tropical Storm Bilis killed more than 600 people last month. Saomai, with winds up to 135 mph, made landfall at the town of Mazhan in coastal Zhejiang province at 5:25 p.m. and was moving northwest at 12 mph, the Xinhua News Agency said, citing weather officials. See: Powerful typhoon slams China
Posted by KNN-AHTUR KEYMAH at 1:04 PM No comments:

A New Vaccine for Girls, but Should It Be Compulsory?

Around the time report cards came home this spring, federal health officials approved another new vaccine to add to the ever-growing list of recommended childhood shots — this one for girls and women only, from 9 to 26, to protect them from genital warts and cervical cancer. One of my own daughters, who just turned 9, would be a candidate for this vaccine, so I’ve been mulling this over. A shot that protects against cancer sounds like a great idea, at first. States may choose to make it mandatory, though the cost for them to do so would be prohibitive. But let’s think carefully before requiring young girls to get this vaccine, which protects against a sexually transmitted virus, in order to go to school. This isn’t polio or measles, diseases that are easily transmitted through casual contact. Infection with this virus requires intimate contact, of the kind that doesn’t occur in classrooms. Besides, we already know how to prevent cervical cancer in this country, and we’ve done a darn good job of it. In the war against cancer, the battle against cervical cancer has been a success story. Why, then, did federal health officials recommend the inoculation of about 30 million American girls and young women against the human papillomavirus, a sexually transmitted disease that in rare cases leads to cervical cancer?

The number of cases diagnosed each year and the number of deaths per year have continued to drop, even though the population is growing. From 1997 to 2003, the number of cervical cancers in the United States dropped by 4.5 percent each year, while the number of deaths dropped by 3.8 percent each year, according to a government Web site that tracks cancer trends, called SEER or Surveillance, Epidemiology and End Results (seer.cancer.gov/statfacts/html/cervix.html). This, while many other cancers are on the rise. If current trends continue, by the time my 9-year-old daughter is 48, the median age when cervical cancer is diagnosed, there will be only a few thousand cases of the cancer in women, and about 1,000 deaths or fewer each year, even without the vaccine.
Posted by KNN-AHTUR KEYMAH at 1:15 PM No comments:

Sugary drinks are piling on the pounds

A single can of soda a day can add 15 up to pounds a year, report says - Associated Press

MILWAUKEE - Americans have sipped their way to fatness by drinking far more soda and other sugary drinks over the last four decades, a new scientific review concludes. An extra can of soda a day can pile on 15 pounds (7 kilograms) in a single year, and the evidence strongly suggests that this sort of increased consumption is a key reason that more people have gained weight, the researchers say. See: Sugary drinks are piling on pounds
Posted by KNN-AHTUR KEYMAH at 7:03 AM No comments:

DAYTON, Ohio (NNPA)- With a conflict resolution center already established in Israel and a direct line of communication to Hamas-one of Israel's most ardent foes-SCLC (Southern Christian Leadership Conference) President Charles W. Steele Jr. said Dr. Martin Luther King's old organization is poised to play a key role in defusing tensions around the world. "In a world of prejudice, violence, poverty and ignorance, the message of SCLC is to teach and apply Martin Luther King Jr.'s principles of non-violence and conflict resolution," Steele said. One of SCLC's goals, he said, is, "to bring peace, security and hope to the afflicted people in the South, throughout America and around the world."

Steele said that mission was crystallized in a conversation he had in December 2004 with Prime Minister Aerial Sharon and his chief of staff. "I was in Israel talking with the chief of staff and the prime minister and he [the chief of staff] said, "You all can bring about world peace. You all have been through the Trans-Atlantic African slave trade and you got lynched, you were murdered, your women were raped and killed, but you didn't turn out to be terrorists. You didn't strap yourselves with a bomb, you don't have any blood on your hands." I said, "What are you saying Mr. Chief of Staff to the prime minister?' He said, 'Charles, what I am saying is you can stop the war.'" Steele said representatives of Hamas have recently gotten in touch with him, urging SCLC to help diffuse tension in the Middle East. And, Steele said he plans to do just that.

The answer to curbing violence in the U.S. and internationally, Steele said, is the establishment of SCLC Martin Luther King Jr. Conflict Resolution Centers. SCLC has established two centers, one in Dayton, Ohio, the home of Board Chairman Raleigh Trammell, and one in Dimona, Israel, the home of African Hebrew Israelites. A third center is expected to be opened in Ivrea, Italy later this year. The goal is to establish 50 centers in the U.S. and 10 abroad by 2010, Steele said.
Posted by KNN-AHTUR KEYMAH at 8:50 PM No comments:

When Gina O’Brien decided she no longer needed drugs to quell her anxiety and panic attacks, she followed doctor’s orders by slowly tapering her dose of the antidepressant Paxil. The gradual withdrawal was supposed to prevent unpleasant symptoms that can result from stopping antidepressants cold turkey. But it didn’t work. “I felt so sick that I couldn’t get off my couch,” O’Brien said. “I couldn’t stop crying.” Overwhelmed by nausea and uncontrollable crying, she felt she had no choice but to start taking the pills again. More than a year later she still takes Paxil, and expects to be on it for the rest of her life. In the almost two decades since Prozac — the first of the antidepressants known as SRIs, or serotonin reuptake inhibitors — hit the market, many patients have reported extreme reactions to discontinuing the drugs. Two of the best-selling antidepressants — Effexor and Paxil — have prompted so many complaints that many doctors avoid prescribing them altogether. See: Some can't stop antidepressants
Posted by KNN-AHTUR KEYMAH at 7:03 AM No comments: