On Wednesday October 4, 2006, the saints of the Tallahassee, Florida mission opened the KOY’s third Soul Vegetarian Restaurant on wheels. And the report is awesome! Shortly after the Tallahassee Brotherhood set up the food trailer the first group of customers excitedly approached the counter and placed their orders while exclaiming their appreciation for being able to get Soul Vegetarian’s delicious cuisine during the evening hours (Monday thru Friday, 5pm to 10pm). As the evening progressed, the Tallahassee Sisterhood served scores of customers as they continued to come until just minutes before closing. At the end of the first night of business, the new food trailer’s performance had met and exceeded all expectations. Prior to the opening of this new location, Soul Vegetarian on Wheels had only been operating during the lunchtime hours (Monday thru Friday, 11am to 4pm). This latest expansion will now provide the extremely loyal Soul Vegetarian customer base with greater access to our cuisine!

To give some background, Soul Vegetarian Restaurant on wheels began back in 1995 as an idea of Prince Rahm Ben Yehudah (Southern Region Representative and Holy Council member of the African Hebrew Israelites of Jerusalem) and made its initial appearance in the 1996 Olympic Games in Atlanta Georgia. During the Olympic Games the KOY and partners successfully operated three food trailers and served multitudes of people. Then in October of 1997, after learning that Prince Rahm was offering two of the food trailers for sale on behalf of the KOY, the young saints of the Tallahassee, Florida mission purchased one of the food trailers and began operating on Florida A&M Universities campus. The food trailers still currently operate on the campus today. The original team of saints consisted of Ahmahtsiyah, Nehehmahnyah, Zacoor, Daniella, Zohariah, Emah Hotirah and Prahkeet. Several months later as they recognized the great potential of the food trailers, the saints purchased the second food trailer in January of 1998. It currently operates in the heart of downtown Tallahassee on Kleman Plaza (200 N. Duval St) which the saints have aptly renamed Kingdom Court.

The new food trailer sits just off the corner of Gaines Street and Railroad Avenue in a well populated area just blocks from downtown Tallahassee. The two major universities in town: Florida A&M (FAMU) and Florida State (FSU) are within walking distance of the new food trailer. The location is also home to a very well developed artist community and there is a 300 room Residence Inn by Marriott near completion on the corner adjacent to the food trailer.

The look of the new food trailer is totally different from the two existing trailers. The first and most astounding aspect of the new trailer is that the Divine Jerusalem Brotherhood in the Southern Region, again inspired by and under the direction of Prince Rahm, conceptualized, designed and then piece by piece built the new food trailer. You see, the original food trailers are stainless steel and were purchased “ready made” from a company in New Jersey. But Prince Rahm envisioned that the KOY could build a trailer with all of the desired custom features and at the same time save money doing it! And the results are awe inspiring! The exterior of the trailer is made from the finest marine lumber that has been stained and coated with 3 layers of poly urethane seal. This process protects the wood and gives it a high gloss shine. Also, the new food trailer design is 2 to 3 feet taller than most mobile units, a feature that harmonizes with the distinguished manner in which the KOY implements all its expansion projects. Surely all heads turn when viewing this perfectly functional design of skill and craftsmanship. The interior has all the amenities that one needs to prepare and serve delicious Soul Vegetarian cuisine including a refrigerator/freezer, steam table, counter top stove, blenders, 3 compartment sink, cabinet space and electricity. The menu consists of all the Soul Vegetarian favorites (Bar-b-que tofu, mac & cheese, kale-bone, Garvey burgers, soy beam ice cream, sweet potato pie, live/raw platters, etc.) as well as a few regional selections.

Respect and continued encouragement is given not only to the saints of the Tallahassee mission, but to all saints near and far who unify under the KOY platform of the divine order of all things in common to bring about expansion. The current team of saints consists of Ahmahtsiyah, Anahv, Ahmdiel, Aveeazer, Daniella, D’Gahnyah, Prahkeet, sister Candy, sister Simone and sister Renee. This great expansion is evidence of the great advancements taking place on the earth within the framework of the KOY paradigm. It demonstrates once again that there is no need to look “outside” for the answers; for it has been revealed to us that the Living Yah dwells in the midst of us and therefore so does all of the answers to life’s blessings! Halleluyah! Yah Khai! And thanks and praises to His Excellency Ben Ammi Ben Israel, the Living Yah, for the power that He has given us in this season!

PETA pal John Feldmann, lead singer of the punk band Goldfinger, raves: “Soul Vegetarian has the most awesome vegan lasagna and vegan gyro sandwiches ever!”John’s not the only one singing the praises of the Soul Vegetarian restaurants. PETA’s elephant specialist, Jane Garrison, says, “When you walk into Soul Vegetarian South, the aroma of the food carries you (running) down the hall to the dining room. The people who run the restaurant always greet you as if you are entering their home—after the second visit, we were greeted with hugs!“My favorite dish is the ‘bar-b-que twist’—absolutely incredible fib ‘ribs.’ The texture is amazing—not too mushy and not too tough. The homemade sauce is so delicious, you will find yourself trying to lick every bit off your fork! This dish is served with the best vegan potato salad I have ever had and some yummy Southern-style greens.

Every meal at Soul Vegetarian for me is followed by my favorite dessert: sweet potato pie topped with vegan vanilla ‘ice cream.’ The crust of the pie is so sweet and delicious, you feel like you are eating a pie that has been placed on a cookie!“Other amazing dishes include the lasagna, baked tofu, pasta casserole, divine protein salad (mock chicken salad)—and anything else they are serving as the special for the night! “The food, the people, the price: Soul Vegetarian can’t be beat!”

Philosophy: For more than a decade, Soul Vegetarian has been the place where vegetarians and nonvegetarians come to enjoy a more healthful way of eating without concern for loss of flavor or the joy of eating. Colorful and delicious dishes, exotic décor, and superb staff combine to create a completely vegan dining adventure that must be experienced to be believed. See: KingdomOfYah.com/SV.htm
Posted by KNN-AHTUR KEYMAH at 7:40 AM 1 comment:

The spiritual foundation of the CFF is rooted in the Divine Cycles of Yah. In agricultural terms, the “First Fruits” or “Harvest” of one’s labor in the field was a great blessing. The first fruit was the increase (blessing) of the farmer’s hard labor and toil in the field. Yah worked and created the heavens and the earth – the fruit of Yah’s creative life-giving spirit. This creation was termed “Genesis” or “Berasheet” in Hebrew which means “in a beginning” or a new birth of the consciousness of Yah in the minds of men.

The Chosen First Fruits from Dimona

Shalom to all of you Chosen First Fruit out there, near and far, whom have dedicated your lives to the greatest endeavor ever to be undertaken on the face of the earth – the building and expansion of the Kingdom of Yah! And shalom to all of our friends and associates who also have seen the need to fight for a new world. We, the Chosen First Fruit Council from Jerusalem, extend our love and blessings to you all.

The Chosen First Fruit Worldwide is being created to increase communications between CFF Worldwide. This can serve as the vehicle by which we can unite across the distances that separate us, strengthening us to expand our efforts in building this great new world. As the youth of the Kingdom of Yah, it is time for us to arise and shine and show forth our great works to let the world know that Yah Khai-Yah Lives!

CFF Worldwide will cover news from our chapters worldwide. In this way we will always stay well informed about all CFF activities. We are requesting that every extension participate in this great new endeavor. We are now seeking volunteers to fill the following positions:
Extension representative for CFF Worldwide – The person who fills this position will solicit articles, creative submissions like photos, poetry, creative writings, menus, testimonies, etc. from CFF in their extension. All entries must be emailed to our email site which is cffworldwide@yahoo.com. All those interested in filling these positions, please email your contact information to our email site.
Posted by KNN-AHTUR KEYMAH at 8:51 PM No comments:

CFF-Ahk Yiore taking care of "Big Business" in the V.I.

Ahk Yiore is a member of the CFF-Chosen First Fruits from our St. Croix Mission. He has been taking care of "Big Business" as a member of the CFF. This season he has traveled to Israel and Africa spreading the good news of the Kingdom of Yah. Click on the links below to see some of the latest accomplishments he has achieved: 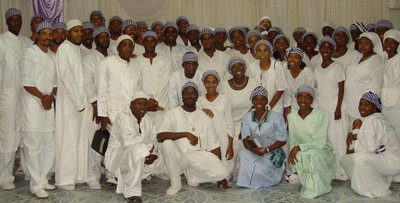 Yah Khai!!! This week KNN will highlight the accomplishments of the Chosen First Fruits of the Kingdom of Yah. The Chosen First Fruits (CFF) is an international organization of leaders who are setting new standards for world change. The CFF are mature adults ranging from ages 18-40, characterized by a renewed appreciation for values, morals, ethics, and spirituality. The CFF have dedicated their lives to creating a new world, taking a stand to combat those false perceptions that have resulted in the confusion and rampant immorality presently destroying youth globally. Plug in to KNN this week for highlights of the CFF in action. Yah Khai!!! We Got This!!!!!!!
Posted by KNN-AHTUR KEYMAH at 6:15 AM 1 comment: