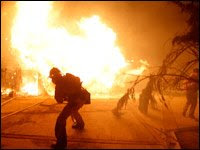 A wind-blasted wildfire tore through the city's northern foothills early Saturday, sending thousands of residents fleeing in the dark, forcing a hospital to evacuate and destroying an untold number of homes.

The fire broke out late Friday night in the foothill community of Sylmar on the edge of the Angeles National Forest and quickly spread across 2,600 acres — more than 4 square miles — in a few hours as it was driven by Santa Ana wind that gusted as high as 76 mph.

At least 10 homes were burned, officials said, but aerial footage from television helicopters showed many mobile homes in flames. An Associated Press photographer said a fire crew abandoned one trailer park that was burning out of control.

Part of the area's network of highways was shut down.

To the west, firefighters were still battling a separate wildfire that destroyed more than 110 homes in Santa Barbara.

See: Photos Show Scope of Devastation
Posted by KNN-AHTUR KEYMAH at 9:42 AM No comments:

The New England Journal of Medicine study stressed GPs should regularly measure patients' waists as a cheap and easy way to assess health.

The link between waist fat and health problems has been established for some time, but the sheer size of the study gives scientists a far more accurate picture.

The researchers, including some from Imperial College London, followed the volunteers, who were an average of 51 years old at the start of the study, for the next 10 years, during which time 14,723 of them died.

The standard measure of obesity, body mass index (BMI) remained a reasonable predictor of health problems, with those with a high reading more likely to die from cardiovascular disease or cancer.

However, the 'hip/waist ratio', a number produced by dividing the waist size by the hip measurement, and just the waist measurement on its own, were both good ways of sorting out those at highest risk.

"If you tend to gather weight around your middle, increasing the amount of activity you do and watching what you eat will help to reduce your risk of heart disease and of dying early."

A glimpse inside the neck arteries of obese children and teens reveals cardiovascular systems more like those of 45-year-olds, researchers said Tuesday.

"There's a saying that you're as old as your arteries," said the study's lead author, Dr. Geetha Raghuveer, associate professor of pediatrics at the University of Missouri Kansas City School of Medicine. "These kids are showing up with arteries that show middle-aged conditions."

In fact, more than half of the 70 youngsters enrolled in the Children's Mercy Hospital study had a "vascular age" about 30 years older than their actual age, putting them at risk for early heart attacks, stroke — and death. The research was presented Tuesday at the American Heart Association's scientific meeting in New Orleans.

That finding might also hold true for many more young people in the United States, where more than 16 percent of kids ages 2 to 19 are considered obese, according to federal statistics.

"It kind of hammers home that the risk might be speeded up," said Dr. Stephen Daniels, chief pediatrician at the Children's Hospital in Denver, who was not associated with the new study. "It does kind of fit with the concept that kids with high cholesterol and other risk factors probably have premature aging factors." 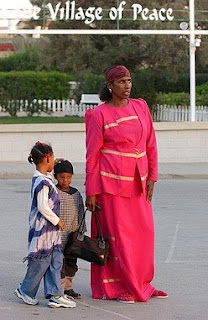 This community itself is a vehicle for change
By Brenda Gazzar
Jerusalem Post.com

Devorah Eshet Ravya of Dimona was born and raised in Chicago during politically and socially turbulent times.

So when Illinois Sen. Barack Obama was elected last week as the first African American president of the United States, the 54-year-old member of the Black Hebrews couldn't help but feel a deep sense of hope and satisfaction.

"To see, at this time, something I never believed I would ever see - a black man being validated as being worthy, being competent, being a man of great achievement... to lead what is believed to be the most powerful nation on earth, is very gratifying," Eshet Ravya said Sunday, while sitting in a garden at the entrance to the community's kibbutz, the Village of Peace, in Dimona.

"We are siblings of the same struggle, so to speak," said Priest Yehuda HaCohane, 43. "We desire a better world. This community itself is a vehicle for change," a beacon of light to the nations.

For example, through the community's strict vegan diet, healthy lifestyle and culture, the community has rid itself of many health and social diseases that plague others around the world from the same gene pool, he said.

"We've been able to avoid many of the scourges that affect people there; diabetes, high blood pressure, heart disease, it goes on down the line," he said.

Community members say they have succeeded in purging other ills that have plagued African Americans in the US, ranging from alcoholism, to drug abuse, to violent crime.

In 2005, in collaboration with the Southern Christian Leadership Conference, the civil rights organization co-founded by Dr. Martin Luther King Jr. in 1957, the community opened a conflict resolution center in Dimona that teaches holistic nonviolence and reconciliation in communities.