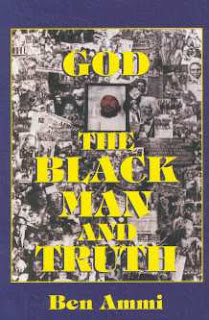 Hailed as the "decoder to the Bible", this seminal work by Ben Ammi, renowned Hebraic Scholar and Spiritual Leader of the African Hebrew Israelites of Jerusalem, is the first part of the acclaimed Resurrection Trilogy.

In God the Black Man and Truth, Ben Ammi clearly and thoroughly explores the numerous spiritual, social, political, economic and health ills that are plaguing Black people around the globe and links them unquestionably to our failed relationship with God.

Scriptural and prophetic analysis is brought to bear on the crumbling family structure, the sad state of the ecosystem... But far more than just analysis, Ben Ammi offers the Redemptive Plan of God -- tested and true solutions to the state of the world today and its people in simple and direct language.

The new 40th year hardback edition of "God The Black Man & Truth" is now at the printer. Reserve your copy today before these books hit the shelves. Don't miss out. Pre-purchase your book today while supplies last. The cost of the book is $20.

To pre-purchase your book, remit your check or money order today to:

Please include shipping and handling fees. If you have any question please contact Ahtur Keymah at keymah777@aol.com.

Mac, 50, had been hospitalized for about a week at Northwestern Hospital, according to his spokeswoman. A few years ago, Mac disclosed that he suffered from sarcoidosis, a rare autoimmune disease that causes inflammation in tissue, most often in the lungs.

The comic born Bernard Jeffrey McCullough could cut an imposing figure. He stood six-foot-three, was built like a fullback and carried himself with a bouncer's reticence. But perhaps the strongest weapon in the Chicago comedian's arsenal was that voice, that amalgam of thought and a delivery that could rise like a tidal wave, outpace a Gatling gun and remained, to his last days, loud and unapologetic.

He wasn't scared, he told us time and again, to tell anyone what he thought, to say what others were afraid to say. That fearlessness wasn't always welcome, considering Mac didn't get his big break until his 30s. But when he did, the comic skyrocketed to success in stand-up, television and the big screen.

Mac is survived by his wife Rhonda McCullough, their daughter, Je'Niece, a son-in-law and a granddaughter, Jasmine.

See: Bernie Mac dies at 50
Posted by KNN-AHTUR KEYMAH at 7:11 AM No comments:

The Kingdom of Yah is on the move in Africa

It is the position of the AHDA that the most valuable resources Africa has to offer, are its human resources and that by investing in its development, we will insure a future of strength, vitality and productivity for the continent. 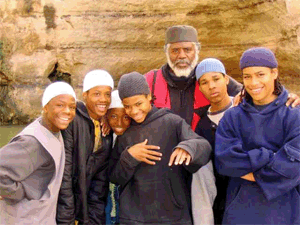 This thriving community serves as a model for communities around the world
By Mario Starks
Globalsoulpower.com

The African Hebrew Israelites of Jerusalem, also known as the Kingdom of Yah, arrived in Dimona, Israel, in 1969. This new community in Israel consisted originally of African-Americans who first migrated from America to Liberia (West Africa) during the heightened Pan-African movement of the 60s and was founded by Ben Ammi Ben-Israel.

While in Liberia, the group settled and purged themselves of the negative mental and physical conditions that were present in their former home. After their settlement period in Liberia, the small community made plans to migrate onward, making the last and final portion of their journey home to Israel - land which they consider geographically a part of Northeast Africa.

The group's lifestyle places great emphasis on diet, spirituality and family. They maintain a vegan diet and exercise frequently. The community harvests its own food, administer their own schools, and operate their own hospital, a pre-natal/post-natal care facility.

One notable achievement that has attracted the attention of scientist and health practitioners is the undisputed status of good health that exists among the community's residents. For example, "a medical study conducted in Dimona by US university researchers in 1998 found the community was largely free of illnesses typical to African-Americans such as hypertension, obesity and high cholesterol" reports Avida Landau of the South African Star newspaper.

The African Hebrew Israelites continue to expand their presence throughout the world with community centers and their own chain of vegan restaurants in Israel, Ghana, US Virgin Islands, and throughout the United States (Chicago, Houston, Washington DC, Atlanta, St. Louis, Cleveland, Tallahassee, Charleston, Vicksburg).

See: Black Hebrews Establish Village of Peace in Israel
Posted by KNN-AHTUR KEYMAH at 5:38 AM No comments: