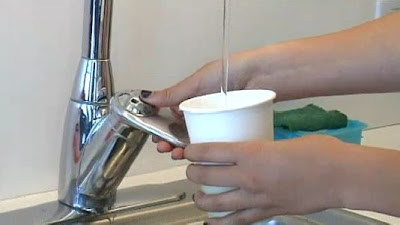 U.S. says too much fluoride in water
By Mike Stobbe
Associated Press

Health officials note that most communities have fluoride in their water, and toothpaste has it, too. Some children are given fluoride supplements.

Maryland has among the highest fluoridation rates in the nation, said Dr. Harry Goodman, director of the state Department of Health and Mental Hygiene's Office of Oral Health. For public water systems that add fluoride to their water, Maryland recommends a level of 1 milligram of fluoride per liter, according to the Maryland Department of the Environment.

The federal Centers for Disease Control and Prevention reports that fluorosis is unexpectedly common in children ages 12 to 15. And it appears to have grown much more common since the 1980s.

"One of the things that we're most concerned about is exactly that," said an Obama administration official who was not authorized to speak publicly before the release of the report. The official described the government's plans in an interview with the Associated Press.

But there are other concerns. A scientific report five years ago said that over a lifetime, too much fluoride can lead to crippling bone abnormalities and brittleness. That and other research issued Friday by the EPA about the health effects of fluoride are likely to re-energize groups that oppose adding it to water supplies.

Fluoride is a mineral that exists naturally in water and soil. About 70 years ago, scientists discovered that people whose supplies naturally had more fluoride had fewer cavities. Some locales have naturally occurring fluoridation levels above 1.2. Today, most public drinking water is fluoridated, especially in larger cities. An estimated 64 percent of Americans drink fluoridated water.
Posted by KNN-AHTUR KEYMAH at 12:20 PM No comments:


A 10-year-old boy is accused of shooting and killing his mother after they argued over chores. The incident happened on Sunday.

According to the boy's sister her mother, 46-year-old Deborah McVay, had asked her son to bring in firewood, and the boy became angry grabbed a .22 caliber rifle and shot his mother in the back of the head.

The 10-year-old is in the custody of juvenile authorities and is charged with one count of murder.
Posted by KNN-AHTUR KEYMAH at 2:32 AM 4 comments: