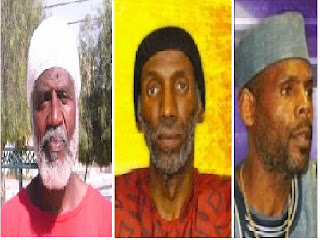 “Truth the Forbidden Cure!”
“ Dedicate Yourself to Life OR Educate Yourself to Death.”
These regenerative and revolutionary concepts heralded the arrival of the scholarship team from the Institute of Regenerative Truth Dimona, Israel; Crowned Deputy Minister Dr. Ahdeev Ben Yehuda, National Spokesperson, and Minister Dr. Elyahkeem Ben Yehuda, Master Lecturer at The School of the Prophets Institute at Jerusalem. Both are members of the Governmental body of the Hebrew Israelite Community, Hebrew Linguists and members of the International Jerusalem Brotherhood.

The collaborative event, organized by the Institute of Regenerative Truth of the Hebrew Israelite British Isles Community in conjunction with a number of other Black Community Organizations including Black Star Line and Nu- Beyond, was held at the London South Bank University.

Friday evening of the 1st of May 2009 saw an audience of African people from various groups and organizations listen with a mixture of awe, delight, disdain and the occasional cringe factor as Ahtur Sgan (Crowned Deputy Minister) Dr. Ahdeev’s calm meditational style relaxed and prepared the audience for Lion’s roar and presentational prowl of Sar (Minister) Elyahkeem. The Lion and Lamb duo captivated the audience aided by the interactive, multi-media power-point presentation.

They introduced the audience to the notion of ‘Dedication’ as the key Hebraic concept of what has been defined as Education; but the end result of Contemporary Education was shown in graphic images of the cascading demise of the earth’s bio-diversity, geological, social and economic; scientific and medical systems. They stressed that the Bible has no word for education because there is no Hebrew word that corresponds with this process.

The audience, many of Egyptology/Kemetic persuasion have various issues with the Holy Bible--the central reference text used; while others reject the Genesis narrative of the Adamic Civilization. Both speakers elucidated the devastating impact of Contemporary Education and illustrated how a system of ‘Dedication’ will deliver a new mindset, concept and application to teaching and learning that will lead to harmonious living with the ecology of peoples and earth’s eco-systems.

Minister Elyahkeem drew contemporary parallels and commonsense examples to clarify and simplify the scholarship position of the Kingdom, though the language and terms were not calibrated to the majority of the listeners. The combined impact confounded some, enlightened, delighted and irritated others.

A few uncomfortable with the geo-political location and developing dynamics of the Community’s status within the State Israel raised the issue of the community’s youth in the Israeli Defense Force (IDF). This provocative gesture at question time by a prominent community activist, while causing some ripples, did not derail the overall sentiments of the main organizers and majority of audience participants who were captivated!
With his new Israeli citizenship status, Minister Elyahkeem answered the question with authority and counter-challenges to the questioner. He closed by stressing that, “ We are concerned about being prophetically and not politically correct!” The issue remains a sore one for some, as the profile of the Community is being raised within the British Isles African community of families and networking organizations.

Brother Dr. Les Henry, one of the main partners commented that he never knew the Hebrew Israelites were ‘like this’ and would love more presentations and collaboration with the British Isles Scholars of the IRT.

While the formal evaluation is taking place, we thank the team for their scholarship and geo-political skills delivered as the seeds of ‘Ancient Dedication’ are now planted in the minds of the community.
Posted by KNN-AHTUR KEYMAH at 9:07 PM 6 comments:

There was a time when red meat was a luxury for ordinary Americans, or was at least something special: cooking a roast for Sunday dinner, ordering a steak at a restaurant. Not anymore. Meat consumption has more than doubled in the United States in the last 50 years.

Now a new study of more than 500,000 Americans has provided the best evidence yet that our affinity for red meat has exacted a hefty price on our health and limited our longevity.

The study found that, other things being equal, the men and women who consumed the most red and processed meat were likely to die sooner, especially from one of our two leading killers, heart disease and cancer, than people who consumed much smaller amounts of these foods.

Results of the decade-long study were published in the March 23 issue of The Archives of Internal Medicine. The study, directed by Rashmi Sinha, a nutritional epidemiologist at the National Cancer Institute, involved 322,263 men and 223,390 women ages 50 to 71 who participated in the National Institutes of Health-AARP Diet and Health Study. Each participant completed detailed questionnaires about diet and other habits and characteristics, including smoking, exercise, alcohol consumption, education, use of supplements, weight and family history of cancer.

The increase in mortality risk tied to the higher levels of meat consumption was described as “modest,” ranging from about 20 percent to nearly 40 percent. But the number of excess deaths that could be attributed to high meat consumption is quite large given the size of the American population.

Most religious groups in USA have lost ground, survey finds

Submitted by Melinda B. A.

When it comes to religion, the USA is now land of the freelancers.

The percentage. of people who call themselves in some way Christian has dropped more than 11% in a generation. The faithful have scattered out of their traditional bases: The Bible Belt is less Baptist. The Rust Belt is less Catholic. And everywhere, more people are exploring spiritual frontiers — or falling off the faith map completely.

These dramatic shifts in just 18 years are detailed in the new American Religious Identification Survey (ARIS), to be released today. It finds that, despite growth and immigration that has added nearly 50 million adults to the U.S. population, almost all religious denominations have lost ground since the first ARIS survey in 1990.

"More than ever before, people are just making up their own stories of who they are. They say, 'I'm everything. I'm nothing. I believe in myself,' " says Barry Kosmin, survey co-author.

Among the key findings in the 2008 survey:

• So many Americans claim no religion at all (15%, up from 8% in 1990), that this category now outranks every other major U.S. religious group except Catholics and Baptists. In a nation that has long been mostly Christian, "the challenge to Christianity … does not come from other religions but from a rejection of all forms of organized religion," the report concludes.

• Catholic strongholds in New England and the Midwest have faded as immigrants, retirees and young job-seekers have moved to the Sun Belt. While bishops from the Midwest to Massachusetts close down or consolidate historic parishes, those in the South are scrambling to serve increasing numbers of worshipers.

• Baptists, 15.8% of those surveyed, are down from 19.3% in 1990. Mainline Protestant denominations, once socially dominant, have seen sharp declines: The percentage of Methodists, for example, dropped from 8% to 5%.

• The percentage of those who choose a generic label, calling themselves simply Christian, Protestant, non-denominational, evangelical or "born again," was 14.2%, about the same as in 1990.

• Jewish numbers showed a steady decline, from 1.8% in 1990 to 1.2% today. The percentage of Muslims, while still slim, has doubled, from 0.3% to 0.6%. Analysts within both groups suggest those numbers understate the groups' populations.