Number of women giving birth without a doctor has doubled since 1990-Associated Press-May 31, 2006
The number of women giving birth with a midwife has doubled since 1990, both in absolute numbers and as a percentage of overall births. According to data from the National Center for Health Statistics for 2003, the most recent year for which data is available, 8 percent of pregnant women in the U.S. gave birth with a midwife compared with 4 percent in 1990. Births attended by a certified nurse midwife, for example, have risen every year since 1975. But choosing a midwife is about more than merely selecting a care provider or deciding between birth at a hospital or home. It represents a paradigm shift in how a woman approaches pregnancy, advocates say. Although certified nurse midwives are licensed to administer medication, they generally encourage a drug-free birth and rely primarily on natural methods of care. Click Here:
Mothers Choose More Midwives
Posted by KNN-AHTUR KEYMAH at 11:03 AM No comments: 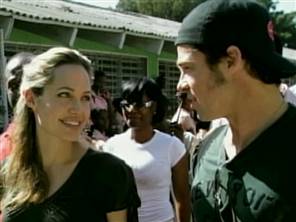 Brangelina baby name translates to ‘Messiah’-Shiloh is the Hebrew word for ‘Messiah’ and also means ‘peaceful one’-MSN News
NEW YORK - Nothing was normal about the birth of Angelina Jolie and Brad Pitt’s child, so naturally, neither was their baby’s name.
The child — whose pending arrival created a frenzy of hyperbole making it for some the most awaited baby since Jesus — was named Shiloh, which fittingly means “Messiah” or “Peaceful One.”
Shiloh Nouvel Jolie-Pitt was born Saturday evening — via Caesarean section, according to People magazine — in Namibia where her famous parents had withdrawn for the birth, aided by considerable protection from the African country’s government...“What is interesting is Brad and Angelina went all the way to Namibia to have their baby girl and rather than choose a traditional African name to signify the birth — like many thought they would — they chose Shiloh, also meaning ‘God is great’ in Hebrew,” says Lansky.
Shiloh Nouvel Jolie-Pitt is only the latest instance of a unique name bestowed on a celebrity child. Lately, names rooted in Hebrew are all the rage.
Tom Cruise and Katie Holmes’ baby, who was preceded by nearly as much anticipation as Jolie and Pitt’s, was famously named Suri, which the couple claimed means “princess” in Hebrew (or “red rose” in Persian). Some doubted the Hebrew origin, instead suggesting the more accurate meaning was “pointy nose” from Todas, a language spoken by a Southern India tribe.
Gwyneth Paltrow and Chris Martin named their second child Moses, born in April. Their first child, Apple, remains one of the most renown examples of esoteric names given to celebrity babies.
Posted by KNN-AHTUR KEYMAH at 9:11 AM No comments:

Do You Know Where Your Child Is?

Thousands of missing children not reported in EU May 24, 2006 — By Darren Ennis -Reuters-ABC News

BRUSSELS (Reuters) - Hundreds of children go missing in Europe every day without being reported to the authorities, the European Union's justice chief said on Wednesday. Justice Commissioner Franco Frattini said he believed some of the 25 EU countries were not taking the issue seriously and it was impossible to determine the size of the problem. According to statistics available to the Commission, an estimated 70,000 children go missing every year in Britain.
Yet the data show a far smaller number of children — 1,850 — went missing in Italy last year, while in Belgium 1,022 missing children were reported to the police.
Click Here:http://abcnews.go.com/International/wireStory?id=1999444
Posted by KNN-AHTUR KEYMAH at 8:45 AM No comments: