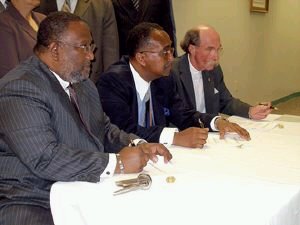 Mississippi Valley State University is bringing international attention to the teachings of the Rev. Dr. Martin Luther King Jr. MVSU officially signed on with the Southern Christian Leadership Conference (SCLC) Monday to develop the Dr. Martin Luther King Jr. Conflict Resolution Center in Ivrea, Italy. Once approved by the Board of Trustees of the Institutions of Higher Learning, the Conflict Resolution Center will combine educational opportunities found through MVSU with instructional course material on non-violent conflict resolution.Courses through MVSU and the Conflict Resolution Center are expected to begin in 2007. "This agreement truly allows Mississippi Valley State University to move into the international community," said MVSU's president, Lester C. Newman. "We just approved an emphasis in conflict management. We plan to do the initial teaching through distance learning." Early in 2005, the SCLC established a center at Dimona, Israel. MVSU signs deal for new King center
Posted by KNN-AHTUR KEYMAH at 4:39 PM 1 comment: 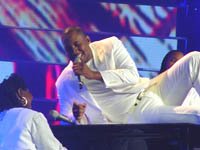 Luke Fisher reporting from Kent (United Kingdom)
Israel's Eddie Butler was present at celebrations marking the 39th anniversary of the Hewbrew Israelite ''exodus'' from the United States. He was part of the ''New-World Passover'' festivities. Ben Ammi Ben- leader of the groups that left the American shores, spoke to online journal Haaretz.com about Eddie Butler- himself with American origins. ''We're always excited about representing Israel,'' Ben Ammi responded, when asked about the community's singer Eddie Butler, who was an enthusiastic envoy of Israel at the Eurovision Song Contest this month.Eddie Butler's song finished in the penultimate postion out of the 24 contestants. This was initially disappointing, however Ben Ammi conceded ''After we considered who won, we knew that the mindset of the people was not ready for the light from Israel.'' In fact, Ben Ammi said that Israel actually emerged as a winner by displaying a unique harmony on stage: ''They (the audience) saw black, they saw white, they saw talent, they saw togetherness, they saw brotherhood. On that stage, they saw Israel in its fullness. That's what we represented. And in that category, we won the Eurovision for Israel.''
Posted by KNN-AHTUR KEYMAH at 1:33 PM No comments:

Indonesia floods, landslides kill more than 100 -
Relief workers say they are 'overwhelmed with the bodies' -Associated Press
JAKARTA, Indonesia - Heavy rains unleashed floods and landslides on a central Indonesian island, killing at least 112 people, officials said Wednesday. At least 100 more people have been reported missing on Sulawesi island, which has been battered by incessant rains since Monday, swelling rivers and inundating hundreds of houses. “We are overwhelmed with the bodies here,” said Bachtiar, head of a public health center in the worst-hit district of Sinjai. “We need help, especially body bags.” See:Scores dead in Indonesia floods
Posted by KNN-AHTUR KEYMAH at 7:56 AM No comments:

In a move that recognizes the modern world's twin obsessions -- indulgence and guilt -- chocolate maker Nestle said Monday it would purchase weight loss product maker Jenny Craig Inc. for $600 million. While best known for its namesake chocolates, Nestle also makes baby formulas, nutrition foods such as PowerBar, drinks to aid weight loss and the Lean Cuisine line. The company's purchase of Jenny Craig follows the lead of consumer products company Unilever, which bought both Ben & Jerry's ice cream and Slim Fast in 2000. See: Nestle will buy Jenny Craig
Posted by KNN-AHTUR KEYMAH at 7:48 AM No comments:

The Dimona Mean Judeans defeated the Galil "Golan Plastic Products" Twisters 16-6 and Penticon downed Ziontours 19-4 in six innings in the first round of the Israel Softball Association playoffs on Sunday night.
The first game at Baptist Village near Petah Tikva featured Dimona, the top A Division team, against the Twisters, the winners of the B Division who defeated the A Division's Tigers for a spot in the playoffs.
Dimona jumped out to a 9-0 lead in the first off pitcher Yosi Ajzenwaser, taking advantage of three walks, two errors and Yigahl Ben Israel's key three-run homer. The Twisters settled down and started hitting Dimona pitcher Yaron Ben-Israel, banging out 14, three each by Moshe Hyde and Eitan Milgram, who tripled, but Yaron got the big outs when he needed them, stranding 10 Twisters on base and never allowing the Galileans to get closer than five runs.
For Dimona, Shlomo Ben-Israel was 4-for-4 with three runs, Yigal had three hits and Elyaheed Ben-Israel and Benkie Ben-Israel each tripled.
The second game of each best-of-three series are scheduled for 7 p.m. and 9:30 p.m. Tuesday at Baptist Village.
Posted by KNN-AHTUR KEYMAH at 9:01 PM No comments:

America's obesity epidemic is definitely driving the nation's type 2 diabetes epidemic, says a new study by the U.S. Centers for Disease Control and Prevention. While other factors play some role in the rapidly increasing number of people with diabetes, obesity is the major factor in the trend, said Linda S. Geiss, lead author of the study, published in the May issue of the American Journal of Preventive Medicine. The study, based on concrete numbers drawn from the entire country, backs up what experts have long believed, said Geiss, a statistician with the CDC's Division of Diabetes Translation.

"Most incidence studies [of diabetes] have been done on samples that aren't representative of the United States," she said. "These [new] data are nationally representative. And these data certainly help make the case that obesity is a major factor in the diabetes epidemic. I think it adds to the evidence." See: Obesity Driving Diabetes Epidemic
Posted by KNN-AHTUR KEYMAH at 6:07 AM No comments: