Recalling their show of strength 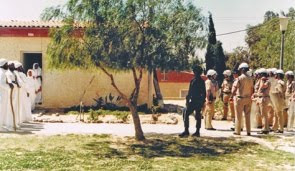 I was like, 'Why do you have your gun on my daughter?'
By David Sheen
Haaretz Newspaper

"Dimona's African Hebrews enjoy widespread support, but 25 years ago they had to stand down Israel's full might to avoid deportation of some of their members."

It was 25 years ago today that 200 Border police officers, armed with guns, tear gas grenade launchers, helicopters and tanks descended on the communal village of African Hebrew Israelites.

Wearing all white and heeding their leader's call to "stay in your places" the community, known more commonly as Black Hebrews, stood its ground, a day it memorializes as the Day of the Show of Strength.

The soldiers were sent to prevent a peaceful march on Jerusalem to demand the release of 50 members of the Hebrew community that had been taken out of their beds for deportation, under the orders of then-Interior Minister Shimon Peres.

The African Hebrew Israelites have recently achieved a modicum of respect in Israeli society. Members of the community have represented Israel in international competitions, most notably the Eurovision song contest. Many of their children serve in the Israel Defense Forces. A few dozen members have even received full Israeli citizenship.

In 2008, President Peres celebrated his 85th birthday in Dimona with the Hebrews, and told them, "Your community is beloved in Israel." But 25 years ago, the situation couldn't have been more different.