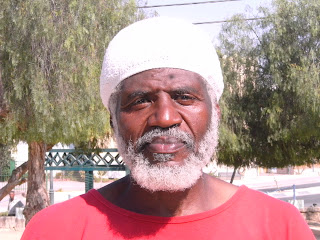 Sar Elyahkeem Ben Yehuda, made history in January 2009 as the first member of the African Hebrew Israelite Community to receive the long-awaited citizenship status. He was joined this week by other members, the Community's first two women to receive the same recognition--Shalaymah Baht Israel and Hetsiliyah Baht Israel, as well as several of their children who also received citizenship along with their mothers. 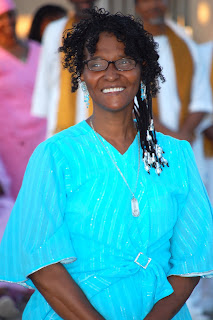 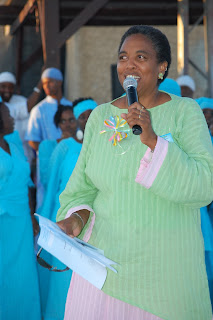 This blessed accomplishment did not come without opposition, as for decades, Israeli authorities suggested conversion to Jewish religion as the only way by which the Hebrew Israelite Community could gain citizenship and thence fully assimilate into the Israeli society.

Under the tenacious leadership of Spiritual Leader Ben Ammi Ben Israel, the 'conversion' topic was not up for discussion. The Community had already traced its lineage back to the Biblical Israelites, identifying in particular as descendants of the tribe of Judah (from which the terms Judaism and Jewish originate). Thus, being Jewish ethnically, the Community saw no need to convert to the Jewish religion to authenticate that which it already was. From the 1970's up to today, the position has never waivered nor changed.

Historically significant is that in 1967, members of the Hebrew Israelite Community left the confines of America-referred to as the lands of the Great Captivity. In 1969, after spending two-and-one-half years in Liberia's bush, and having purged and prepared themselves for entry into the Promised Land, they arrived in Israel claiming their "Jewishness" by way of descendency of the Biblical Israelites, and were more than determined to stay.

In December 1969, the first group which arrived after the Liberian sojourn was initially received as Jews, but by the arrival of the second group 3 months later, the Law of Return had been re-written that one had to be "born of a Jewish mother" in order to partake of the privileges of a "Jewish" inheritance.

Although the journey began with exceeding difficulty, to say the least, today they are reaping the blessings of having returned to their land, and are enjoying the fruits of a peaceful, healthy and exceedingly joyfully dwelling place and a bright future. A vision not so readily apparent before has now emerged clearly as evidence that the decades-long wait for this day was not in vain.

The tide of events which, in former times, sought to flood out and uproot the Community from out of the Holy Land have made a dramatically remarkable turn. Through hard work, dedication, application of Yah-sense and committment to the vision of the visionary Spiritual Leader Ben Ammi, the Community is now, among other things, officially established as Kibbutz Shomreh HaShalom, one of the largest urban kibbutzeem in Israel. Please click here to read a statement posted on Israel's Interior Ministry's official website relative to its current position on the Hebrew Israelite Community.

In maintaining the alignment with the divine, perfect will and plan of Yah (God), Ahkote (sister) Hitsiliyah, Ahkote Shalaymah and their children have all demonstrated the stedfastness, courage, patience, faith and tenacity that is necessary to see the arduous process all the way through, as did Sar Elyahkeem.

These first 3 families having made history for their Community, now too serve as beacons of hope and inspiration for the Community's members, as symbols of victory, and as testimony that...
"Truth Has the Inherent Power to Produce the Promised Effects".
Yah Khai!!!
B'vrahkah!!!
KNN salutes you!!!
Posted by KNN-AHTUR KEYMAH at 8:01 PM 2 comments:

International cancer experts have moved tanning beds and ultraviolet radiation into the top cancer risk category deeming both to be definite causes of cancer.

For years, scientists have described tanning beds and ultraviolet radiation as "probable carcinogens."

A new analysis of about 20 studies concludes the risk of skin cancer jumps by 75 percent when people start using tanning beds before age 30.

The new classification means tanning beds and ultraviolet radiation are definite causes of cancer, alongside tobacco, the hepatitis B virus and chimney sweeping, among others.

The research was published online in the medical journal Lancet Oncology on Wednesday by experts at the International Agency for Research on Cancer in Lyon, the cancer arm of the World Health Organization.

"People need to be reminded of the risks of sunbeds," said Vincent Cogliano, one of the cancer researchers. "We hope the prevailing culture will change so teens don't think they need to use sunbeds to get a tan."

Cogliano said the classification means experts are confident that tanning beds cause cancer, but he noted they may not be as potent as other carcinogens like tobacco or arsenic.

Most lights used in tanning beds give off mainly ultraviolet radiation, which cause skin and eye cancer. As use of tanning beds has increased among people under 30, doctors have seen a parallel rise in the numbers of young people with skin cancer, though most types of skin cancer are benign.

According to the studies reviewed by Cogliano and colleagues, using tanning beds caused about a 20 percent increased relative risk of developing melanoma, the deadliest kind of skin cancer.