Israelis Flood Back to Homeland Amid U.S. Economic Crisis

“Yes, I’m leaving,” she said in Hebrew to her friend on the other end. “I’m giving up.”

On a chilly winter morning, the Israeli ex-pat who made Los Angeles her home for the past six years sat bundled in a thick jacket at a Starbucks in Valley Village. Several days earlier, she had packed up all her belongings, vacated her apartment in Tarzana and moved in temporarily with her eldest son. After six years in the States, Gavriel, 53, had just bought a one-way ticket back to Israel.

The current economic crisis wiped her out, she said, leaving her no other choice than to return home — a decision thousands of Israelis in Los Angeles are now facing. According to the Immigrant Absorption Ministry in Israel, the number of Israelis returning has spiked by 58 percent from the same time last year. The ministry estimates that more than 9,000 citizens returned in 2008, compared to approximately 5,000 in 2007.

“I thought to myself — with all my degrees and experience owning my own businesses, this is what I’ve been reduced to?” she said. “I didn’t come to America to clean buildings. The next day I called my son and told him I’m going back home.”

Within the past three or four months, the Israeli Consulate has seen a dramatic increase in calls from Israelis desperate to return home immediately.

“We’ve received a tsunami of calls,” said Israeli Consul General Yaakov Dayan, who reported that some callers are looking to expedite the required paperwork, while others are requesting economic assistance for their way back — the most desperate are pleading for help in buying plane tickets.

Ex-patriot Israelis almost always talk about moving back to Israel eventually. Moving to the United States is generally seen as a temporary means to a more financially secure life back home.

“You can have everything here, but nothing here,” the 30-something Israeli truck driver said. “There’s no family, no community, no meaning to life here. It may not be simple in Israel, but it’s home.”
Posted by KNN-AHTUR KEYMAH at 9:14 AM 1 comment:

The only reasonable explanation we can come up with is diet
By Barbara Berkeley
WellSphere.com

There are two ways to look at fat accumulation. The general perception is that being overweight just means that someone has eaten too much and their body has stored the excess. Kind of like an overstuffed pillow. If you look at it this way, it’s hard to get very excited about being overweight.

But suppose you look at weight in a completely different way? Suppose that weight gain only happens when there is a real problem with how the body is working. In other words, suppose fat is a symptom of something else? If that’s true, gaining weight is an alarm that’s ringing; a flashing red light. It’s your first indication that something is very wrong.

This is the way I look at overweight. It may be caused by the behavior of overeating, but that behavior has led to a disturbance in the body; a disturbance that is showing up as fat accumulation and signals a problem with the way the body uses sugar, controls blood pressure and manufactures artery-clogging cholesterol.

Overweight trivial? What about this little item that appeared in the paper recently?

“In an age when the adult populations of most industrialized nations have grown significantly taller, the average height of black women in the United States has been receding, beginning with those born in the late 1960s…..The main culprit appears to be diet.”

The gap between the height of white women and their black counterparts is:

“Truly phenomenal,” according to John Komlos, an economist and historian who mas made a specialty of studying human heights. “Such a steep decline is practically unprecedented in modern U.S. history….The only reasonable explanation we can come up with is diet and the obesity epidemic among middle and low income black women.”

The article goes on to make the following point:

Over the last three decades, the prevalence of obesity among white Americans has tripled, while among blacks it has increased five-fold. Black females were hardest hit: almost 80 percent of black females are overweight or obese compared with 62 percent of the total female population, according to the CDC.

I found it interesting that this particular finding did not receive the wide publicity accorded to other obesity related news items. Diet and obesity can actually stunt growth! The fate of obese people who are of lower income or belong to a minority group tends to get less press. That’s shameful because we’re all headed in the same direction. Johns Hopkins University published a paper last year that predicted a whopping overweight and obesity rate of 86 percent in the population at large by 2030. The huge burden of disease that will come along with such an increase is expected to raise obesity related health-care spending from the current $100 billion to over $960 billion per year.

And what about this little article in the Internal Medicine News? A study from the NIH has shown that more than 40 percent (40 percent!!!!) of American adults have blood sugar that is too high. And right above that, an article documents a newly discovered connection between a diabetes diagnosis in midlife (common in overweight people) and a doubling of the risk of dementia.

These headlines represent a tiny fraction of the articles I read each day predicting doom and gloom from our modern obesity epidemic. I walk through my everyday world carrying this information like a heavy weight, while all around me, I am subjected to The Atkins Curse – the conversations about the latest diet book, whether a colon cleanse can help you lose weight, the vow to get serious about that belly just as soon as the next cruise is over.

Honestly. It’s time to get serious now.
Posted by KNN-AHTUR KEYMAH at 9:05 AM 1 comment:

Obesity can trim 10 years off life 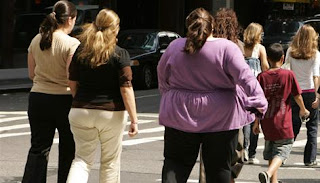 Overall, about 66% of adults in the USA are either overweight or obese
By Nanci Hellmich
USA TODAY

Weighing too much may take as much as a decade off your life, according a new analysis of studies that involved 900,000 people.

Adults who are obese — about 40 or more pounds over a healthy weight — may be cutting about three years off their lives, mostly from heart disease and stroke.

Those who are extremely obese, about 100 or more pounds over a healthy weight, could be shortening their lives by as many as 10 years, the study found. Being extremely obese is similar to the effect of lifelong smoking, says Richard Peto, one of the lead researchers and a professor of medical statistics at Oxford University in England.

Overall, about 66% of adults in the USA are either overweight or obese. About one-third of people in the USA are obese, meaning they have a body mass index of 30 or greater. BMI is a measure based on height and weight.

The researchers and their colleagues examined the findings of 57 studies involving about 900,000 adults who were followed for 10 to 15 years. Most of the people lived in the USA or Western Europe. The scientists analyzed 70,000 deaths.

To See Findings Click Here: Obesity can trim 10 years off life
Posted by KNN-AHTUR KEYMAH at 9:07 AM No comments:

Eating a Bit Less Salt Can Be a Big Health Boon

Over the years, Americans have become inured to salt. Most people have no idea how much salt they consume — on average, about 9 to 12 g (or 3,600 to 4,800 mg of sodium) per person per day, according to the American Heart Association (AHA). That's twice the amount recommended by the government.

In the past four decades, Americans' salt consumption has risen 50%, mostly as a result of eating more processed foods and more food prepared in restaurants. "Over time, we have adapted our taste buds and adapted our bodies to crave much, much higher levels of salt than we require to function," says Dr. Kirsten Bibbins-Domingo, an epidemiologist at the University of California, San Francisco.

Some salt is crucial for good health, of course — to regulate blood pressure and assist with muscle and nerve function — but too much (that is, at the levels we currently consume) can lead to hypertension, heart disease and stroke. If Americans halved their salt intake, as many as 150,000 premature deaths could be prevented each year, according to the American Medical Association. And new research presented March 11 by Bibbins-Domingo at the AHA's annual conference shows that even small reductions — as little as 1 g of salt per day — could have dramatic effects, saving 200,000 lives over the course of a decade.

Cutting out just 1 g of salt (or 40 mg of sodium) per person per day could prevent 30,000 cases of coronary heart disease across the U.S. population by 2019. Reducing consumption by half — a more sizable 6 grams — could prevent 1.4 million cases of heart disease during that same period.

Click here: Eating a Bit Less Salt Can Be a Big Health Boon - TIME
Posted by KNN-AHTUR KEYMAH at 6:48 PM No comments:

Today at 4 pm CST, we will have a historical interview with Minister Eliyahkeem Ben Shaleahk, the first member of the African Hebrew Israelites to receive Israeli Citizenship.

After 40 years of open acrimony with the state of israel--forced deportations, mass incarcerations, threats of extermination, military actions, economic oppression, etc.--minister eliyahkeem represents the an historical turning point in the history of israel, african liberation, and the world. Certainly in the wake of the recent israeli military campaign in gaza, this victory is a victory for all oppressed people and an indication of a proper path to peace.

Listen today as Minister Eliyahkeem details the long road to this moment and the greater victories to come.

Listen to the voice of the new world!!!
Posted by KNN-AHTUR KEYMAH at 10:08 AM No comments: