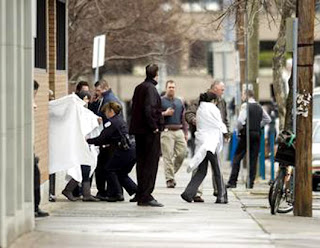 As US Reels From Latest Killings, Some Say Such Shootings Are on the Rise
ABC News.com

A brutal shooting spree in Alabama. A mass slaying in a nursing home on a Sunday morning. A bloody rampage at an immigration center.

As the public struggles to uncover the reasons behind the eight seemingly senseless mass murders so far this year, many researchers are working to determine whether this apparent surge in violence indicates a larger trend, and whether to expect more in the months to come.

Mark Kopta, chairman and professor in the department of psychology at the University of Evansville in Indiana, has researched extensively the country's mass killings, which he defines as attacks leading to the deaths of at least five people, including the killer's suicide.

"This is not a savory subject," Kopta said.

But, he added, it may be one that is becoming increasingly relevant to the U.S. public. In a paper to be presented at the annual meeting of the Midwestern Psychological Association in Chicago this month, he found three incidents in the United States fitting this profile between 1930 and 1970. Three more followed over the course of the 1970s.

Six of them occurred last year. And 2009 has already topped that with eight such killings.

See: Why? The Alarming Leap in Mass Murders
Posted by KNN-AHTUR KEYMAH at 9:19 AM 1 comment:

Italy has had an earthquake. Italy's earthquake occurred in the city of L'Aquila and is now responsible for the deaths of 90 people as BBC News reports.

Another source, OFW Station out of Manila, Philippines, tells us that the intensity of the earthquake measured 6.3 on the Richter scale which is quite strong leaving tens of thousands homeless. It hit in several Italian cities.

In BBC News' article "Powerful Italian quake kills many," the reporting goes on to add that in addition to the dead and homeless, 1,500 are injured and many are missing which of course typically means more people will be found dead.

The Prime Minister of Italy, Silvio Berlusconi declared a state of emergency and also was quoted in the article as saying there will be a "record number of rescuers.

"The impact of the earthquake affected 26 cities and damaged thousands of buildings. Somewhere between 30,000 and 40,000 are homeless and the Italian authorities are trying to find a place to put them. Many are carrying their belongings with them.

It is supposed that many of the missing people are under ruble.

The final state of the city is that a tremor is occurring every 30 minutes.

Many of the buildings in the town of L'Aquila had walls destroyed. Keep in mind L'Aquila is an "ancient town" and these buildings were not capable of withstanding this type of shaking.