More than 60 percent of U.S. in drought

STEELE, N.D. - More than 60 percent of the United States now has abnormally dry or drought conditions, stretching from Georgia to Arizona and across the north through the Dakotas, Minnesota, Montana and Wisconsin, said Mark Svoboda, a climatologist for the National Drought Mitigation Center at the University of Nebraska at Lincoln. An area stretching from south central North Dakota to central South Dakota is the most drought-stricken region in the nation, Svoboda said. "It's the epicenter," he said. "It's just like a wasteland in north central South Dakota." See Full Story: More than 60 percent of U.S. in drought
Posted by KNN-AHTUR KEYMAH at 4:53 PM No comments:

Dr. Baruch's Plantroleum in the news

THE quest for secondhand fryer oil to use as a motor fuel sometimes turns on the question of whom you know. But as some restaurant owners and managers have discovered, it is also a question of who you are and what you do for a living. Take David Selig, the 41-year-old owner of five restaurants in Brooklyn and Manhattan. Cooking flash-fried rice balls, lotus-root chips and vegetarian meatballs, his kitchens produce as much as 70 gallons of waste oil each week — sometimes more than twice the amount needed to run the Dodge Sprinter diesel van that Mr. Selig uses in his restaurant and catering businesses....

Baruch Ben-Yehudah, who runs Everlasting Life, a health food restaurant in Capitol Heights, Md., fills his 1991 Mercedes-Benz with oil that had been used to fry tofu, potatoes and vegetable patties. “It’s not just the money,” he said. “I did it because I saw what we were doing to the environment and did not want my children to see their father contributing to the problem.” And he added: “I believe in being energy independent. I do not want to give someone else power over my life.” Mr. Ben-Yehudah seems to have converted more than his car when he installed a kit from Greasel.com, which has since changed its name to Golden Fuel Systems. He became so enthusiastic about vegetable oil that he started a company, Plantroleum.com, to install conversion kits.

As he sees it, even paying full price for new vegetable oil is better than buying fossil fuel. “If I don’t have enough filtered used oil, I’ll go out and buy new oil for my car,” he said. “I can get vegetable oil for $2.45 a gallon, and diesel fuel goes for $3.09 around here — and that’s not counting the additional cost of what it does to the environment. “Vegetable oil is the perfect solution,” he added. “It’s renewable and unending.” See: Green Tech: A Restaurant Problem Becomes a Solution
Posted by KNN-AHTUR KEYMAH at 8:45 AM No comments: 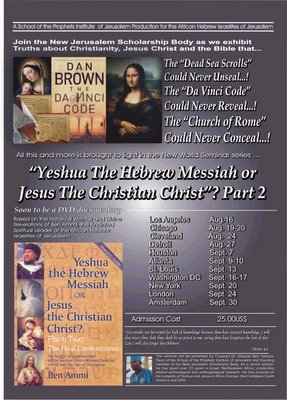 FRESNO, Calif. - At least 132 deaths are likely linked to a nearly two-week heat wave in California, according to county coroner's offices. The big jump in the death count came primarily from Los Angeles County and the Central Valley counties of Merced and Stanislaus, where coroners struggled to keep up. The vast majority of those deaths statewide have been elderly people whose bodies don't cope as well in the heat. In Fresno County’s morgue, the walk-in freezer was stuffed with bodies, with some piled on top of others, said Coroner Loralee Cervantes. With limited air conditioning, employees worked in sweltering heat as they investigated at least 22 possible heat-related deaths. “It’s never been like this in my years here,” Cervantes said. “This is really tragic.” See: Calif. heat toll overwhelms coroners
Posted by KNN-AHTUR KEYMAH at 12:03 PM No comments:

The Soulveg team often dreamed of starting a business which would show people how good vegetarian food could be. After a visit to the US in 2004, they decided it was time to embark on a journey around the world which would allow them to learn all of the skills they would need in order to bring the dream into fruition. The team commenced rigorous, full-time training in early 2005, under the Chefs of the African Hebrew Israelites of Jerusalem, a holistic community, based in Dimona, Israel which established the Soul Vegetarian Restaurant, the largest vegan restaurant chain in the world, with several locations including Chicago, Atlanta, Florida, Texas, California, Washington, St. Croix, Ghana, South Africa, London and Israel. Their training took them around the world visiting places including Thailand, Germany, Israel, Los Angeles, Chicago and Texas, where they learned a multitude of tried and true recipes, culinary techniques and nutritional facts, as well as scientific and Biblical explanations of vegetarianism and holistic agricultural practises.

Darah Morris and his wife Yahvinah, have pledged their time to raising awareness of healthy alternatives to the people of Australia, utilising the skills they learned in their community.
Darah, being of Aboriginal descent, has particular interest in increasing the health of the Indigenous communities of Australia through improved diet. He plans to develop a seminar series to teach his people simple techniques that can be used to improve diet and overall Aboriginal health throughout Australia. Darah, when not busy minding the business, spends time studying Anthropology and Australian Indigenous Issues, and hopes to use his knowledge one day to help all people. Please check out the new Soul Vegetarian Websites http://www.soulveg.com.au/index.php and http://www.soulvegetarian.com/ and Everlasting Life Health Complex .
Posted by KNN-AHTUR KEYMAH at 2:32 PM No comments: 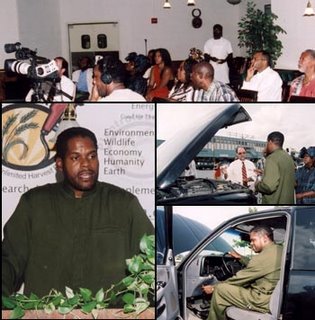 "In the beginning man was given an intuitive understanding. Therefore man in his right mind possesses an instinctive understanding as to why he should not pollute the water he must drink, the air he must breathe and the food he must eat. Thus through the active principle of the GOD-Mind, man was able to maintain the ecological order and harmony of the creation and insure his existence in that order. He became the earths caretaker, its watchman." - Ben Ammi- Imitation of Life

JERUSALEM, -Tired of escalating fuel prices? Is filling up at the station leaving you deflated? The answer to your dilemma – run your automobile on vegetable oil. That is what the Hebrew Israelites are proposing. Dr. Baruch Ben Yehudah of the community’s Washington, D.C.-based company, Plantroleum, is visiting Dimona to demonstrate the viability of this technology. The community envisions a partnership between Plantroleum and MASHAV, the Israel Organization for International Cooperation and Development to assist energy strapped countries and enhance Israel’s image abroad.
Last week Dr Baruch traveled to the Village of Peace in Dimona to direct a team comprised of community members with no prior experience with the technology in the conversion of a diesel powered vehicle to run on vegetable oil. Within forty-eight hours the team converted an ordinary, privately owned vehicle to run on vegetable oil with parts purchased locally in order to highlight the potential advantages of Israel promoting the technology internationally. The vehicle, a 1996 Volkswagen diesel powered van, will be driven from Dimona to MASHAV offices in Jerusalem to meet Ambassador Haim D'von, the head of MASHAV on Tuesday. “With modifications to the fuel delivery system of diesel engines, a Vegetable Oil Fuel System can be added to facilitate powering mechanically injected diesel vehicles on vegetable oil,” states Dr Baruch. The advantages of this type of fuel includes it is cleaner and safer burning, and a significantly less expensive alternative to petroleum-based fuel.” See Complete Article: http://www.plantroleum.com/
Posted by KNN-AHTUR KEYMAH at 5:31 AM No comments:

It's dangerous to be a young male worldwide

LONDON - Young men worldwide have higher death rates than women but the causes vary according to their age and where they live, researchers said on Tuesday. Accidents and suicide are the leading killers in men aged 15 to 34, while deaths from illnesses such as heart disease, cancer and chronic liver disease rise sharply in 35-44-year-olds. “In every country there is an excess of male deaths due to potentially avoidable reasons. The main causes of death are those that are more or less directly attributable to lifestyle and risk taking,” said Alan White of Leeds Metropolitan University in England. Click Here: Lifestyle to blame for young male deaths
Posted by KNN-AHTUR KEYMAH at 2:55 PM No comments:

Dimona's House of Life - Birthing a New Generation of Children 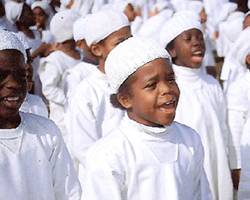 The House of Life, the natural child birthing center founded by the African Hebrew Israelites of Jerusalem, is the crown jewel of this successful system, a thriving prototype setting a new standard in wellness. Since its establishment in 1971, over 700 children have been delivered without the use of drugs or invasive surgical procedures. Undoubtedly, the care program of the House of Life, is the most advanced in the world, providing care for both the newborn and the mother according to Biblical guidelines. In contrast to modern trends, the emphasis at the House of Life is clearly upon providing a divine, wholesome and nurturing atmosphere for birth and aftercare instead of financial concerns and stress. Experienced midwives offer insightful instruction through a pre-delivery program that ultimately alleviates much of the discomfort normally associated with delivery.

At the time of birth, the atmosphere is one of holiness. Immediately outside the birthing area, Priests read specific prayers that both strengthen and calm the mother, and create a sacred environment for the newborn infant. Afterward, the mother is given a period of time during which she is not to engage in any activities other than the care and nurturing of the newborn child. According to Biblical guidelines this period is forty (40) days following the birth of a male child, and eighty (80) days following the birth of a female, to insure the mother's complete recovery. (Leviticus 12:2-5) She spends the first two weeks in the House of Life where her meals are prepared and served, her laundry and other tasks are done for her, while the mother focuses exclusively on bonding with the new baby and regaining her strength. Compare this to medical insurance today, which in most cases covers one day in the hospital before sending the mother home to care not only for herself and the new child, but also for her existing family. In many instances, in addition to taking care of her family, the new mother must also return to work immediately.

In the House of Life, all meals are completely vegan, prepared with organic fruits and vegetables grown by the Community to ensure the best possible nutrients are provided to the mother. All of this is provided at an average cost of one hundred dollars ($100) for the entire two weeks in the House of Life. Compare this to the average cost of having a baby in an American hospital today, which ranges from eight thousand ($8,000) to twenty thousand ($20,000) dollars, for a one or two-day stay. Clearly the House of Life has set a new standard in pre-, delivery and post-natal care... Seeking in all ways, to be in accordance with the Will and the Plan of God.
Posted by KNN-AHTUR KEYMAH at 3:35 PM No comments: